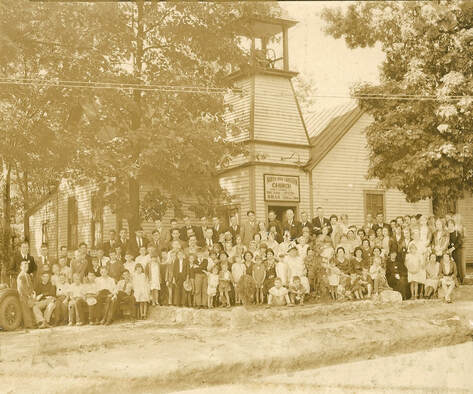 The members met in the charter members’ homes until a tent meeting in the early years resulted in a larger growth of the congregation.  W.A. Jones was the leader in this early movement.  In September 1910, C.M. Aldridge was secured as a speaker for a revival meeting.  Nineteen attendees were baptized into the fellowship.

W.A. Jones served as the first pastor of the church.  His ministry lasted about three years, preaching morning and evening services.  He returned at intervals throughout the following years.

The first building on the present site was erected at a cost of about $350.  This structure was a frame house, 20x30 feet.  It was enlarged several times to meet the needs of the growing Sunday School and church.  The wooden structure was used by the congregation for approximately forty years.

A ground breaking ceremony was held May 5, 1948 to erect a new building to accommodate growth.  The building was financed by selling bricks to the members of the congregation.  Some 50,000 bricks were sold.  Also, eight pews were given in memory of loved ones.  At the end of August 1949, the new structure was completed and the old building was torn away immediately.  In order to complete the new building in the shortest time, $10,000 was borrowed from the Board of Church Extension.  During the intervening period of two years, the debt was paid in full.  The new structure was erected during the pastorate of Rev. D. Guy Saunders.  The congregation was very proud of the building, which features a St. Cecelia interior.  Several years later the need for an educational building was recognized.  This structure was added onto the church and completed in 1963 during the pastorate of Rev. Joe Shelton.

It should be noted that North Spray Christian Church is the first church in the community that started making and selling Brunswick stew.  Proceeds, throughout the years, have helped to meet the needs of the church and missions.  In the 1950s, the men of the congregation provided a building on site with adequate equipment to make and sell the stews, continuing the mission of the church.

The Lord’s Supper is central to our worship.  It is administered each Sunday by lay people and clergy alike.  Christians of all denominations are encouraged to participate with us in its celebration.  We practice baptism by immersion after a public confession of faith in Jesus Christ as Lord.  We recognize all other forms of Christian baptism as being valid and accept a transfer of membership from any other church without rebaptism.

Improvements to the church and the grounds continue through the love and care of our members.  Some of the more recent are:  picnic shelter (1988); playground, fellowship hall entrance, and rear paved parking lot (2000); new downstairs restrooms (2001); meditative labyrinth built by members (2004); sound system, website, and keyboard (2006); front access ramp and brick sign (2007); video system (2009); and church bus (2013).

We celebrated our 100th anniversary in ministry in 2009.  As we begin our second century, we stop to thank those original twenty who banded together.  Through their vision, hard work, and perseverance, and that of those following, North Spray Christian Church still stands today. 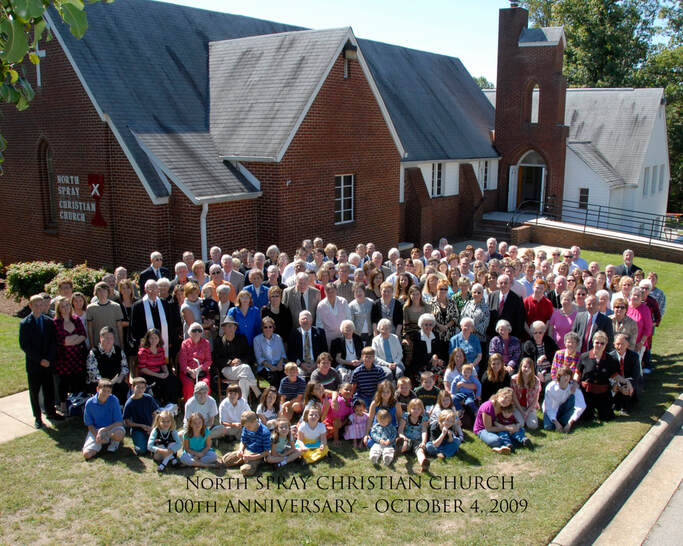