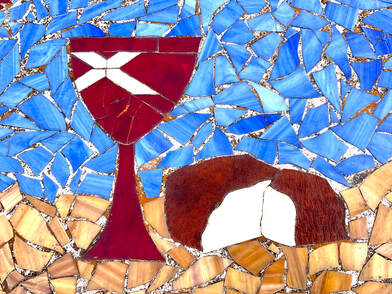 Mosaic on the Center Labyrinth Table
North Spray is home to a large prayer labyrinth.  It is located on our front lawn near the playground.  The labyrinth is free and open to the public.  View our listing on the World-Wide Labyrinth Locator.  Click here to download our prayer labyrinth brochure.

​The labyrinth is a sort of prayer walk.  Its origins are ancient; some of the oldest ones are more than 3,000 years old.  It has been used by the church as an aid to prayer and meditation since at least 200 A.D.  The paved labyrinth became very popular in medieval times during the building of the great European cathedrals.  People who were unable to make pilgrimages to holy sites would often walk the labyrinth a number of times instead (sometimes on their knees).

Though they look similar to one another, a labyrinth is different from a maze in that there is only one way in and one way out.  You cannot get lost in a labyrinth as long as you stay on the path.  Many people see it as an archetypal symbol for our own journey in life.  Some people have pointed out that the many twists and turns of the paths are reminiscent of the patterns of the brain itself.

There are many different patterns for labyrinths.  Our congregation has chosen the popular 11-circuit pattern, often called the Chartres design because it was used in the great cathedral at Chartres, France.  The design of this labyrinth is based on something known as sacred geometry that was popular in the Middle Ages.  Every detail of the design has a special meaning.  The basic pattern formed by the path is that of a cross within a set of 12 concentric circles, which would have appealed to the early church as a reminder of Christ and the 12 apostles.  Other metaphors that can be drawn from the labyrinth are almost endless.

It is impossible to tell whether someone is coming in or going out if you did not see them enter the labyrinth.  There are times when you appear to be the closest to the center of the labyrinth when you are actually the farthest away, and the opposite is also true; when you appear to be the farthest from your destination, you may be almost there.  Some people walk into the labyrinth holding on to a burden and pray to be able to release it on their way out.  Others leave a small token in the center to symbolize that they have turned over their worries to God.  Like any other form of prayer, the experience of each person is unique.  The labyrinth is not appealing to everyone, but it has proved to be a very good prayer tool for people who are attracted to praying with their bodies and not just their minds.

We hope that as you walk this labyrinth you will use your time here prayerfully—asking God to lead you forward into the next step of your journey.  Please also pray for us and our ministry to the community, that we may be faithful to our mission.
Three Stages of a Labyrinth Walk

Walking in to Release
Receiving in the Center
Returning in Unity